Amazon CEO Jeff Bezos, driving a front loader, moved the first load of dirt at the groundbreaking for the $1.4 billion Prime Air Hub at CVG Tuesday (Photo by Mark Hansel).
Posted Wednesday, May 15, 2019 11:37 am
By MARK HANSEL, KyForward managing editor

The appearance by Bezos was a surprise to many in the crowd and the presence of the world’s richest man underscored the valuable role the Hebron hub is envisioned to play in Amazon’s future.

“This hub is going to let us get packages to customers faster,” Bezos said. “We’re going to move Prime from two days to one day, and this hub is a big part of that.”

The Air Hub will open in 2021 as part of the company’s commitment to ensure fast, free shipping for customers.

“Our new Amazon Air hub…is part of our continued investment in Prime to ensure we have the capacity required for continued outstanding service for our customers,” said Sarah Rhoads, director, Amazon Air. “We’re proud to call Kentucky home for our air hub, creating more than 2,000 jobs in this fantastic community.”

Amazon first set roots in Kentucky in 1999 when it opened two fulfillment centers.

In a statement, Gov. Matt Bevin said he is grateful for Amazon’s long-term commitment to Kentucky.

“The commonwealth of Kentucky is thrilled to celebrate this historic day, as Amazon officially breaks ground on its $1 billion-plus Amazon Air Hub,” Bevin said. “This massive project at the Cincinnati/Northern Kentucky International Airport will be revolutionary for the region’s workforce and for our state’s overall economy. We are proud to see this momentous new endeavor take flight.” 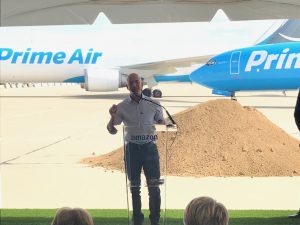 Amazon CEO Jeff Bezos, the world’s richest man, addresses those in attendance for the groundbreaking at the $1.49 billion Prime Air Hub at CVG in Hebron

“A vibrant airport with a strong air cargo footprint improves the economic vitality of our region,” McGraw said. “We are grateful to the Amazon team for locating its Central Air Cargo Hub at CVG.”

The project will be developed along Aero Parkway in Boone County in land adjacent to a DHL hub at CVG.

When Aero Parkway opened in 2012 it was designed to alleviate traffic congestion on Burlington Pike (KY 18) between Florence and Burlington.

Its proximity to CVG also provided convenient access to adjacent parcels owned by CVG, which had increasingly placed an emphasis on attracting cargo operations to supplement its passenger traffic.

Cutouts in the roadway were envisioned to provide convenient access if and when those parcels were developed. Motorists driving along the road in recent weeks have noticed dozens of trees being removed and land being cleared for the project. 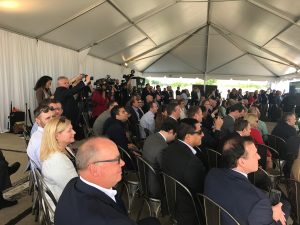 The overflow crowd on hand for Tuesday’s groundbreaking for the Amazon Prime Air Hub saw CEO Jeff Bezos move the first load of dirt for the project.

“Today’s ground-breaking ceremony celebrating Amazon Air’s investment in Boone County, Kentucky, at CVG is a fantastic next step for this historic project,” said Boone County Judge/Executive Gary Moore. “As one of Kentucky’s fastest-growing counties, I am enthusiastic about what this development means for Boone County—as validation of the skill level of our local workforce, advantageous geographic location, and pro-growth policies.”

As part of the agreement to develop the hub, which was announced in January, 2017,  Amazon will lease 900 acres from CVG for more than 50 years.

In January, 2018, Amazon purchased an additional 210 acres of private land next to CVG along Aero Parkway bringing the total acreage under the control of Amazon Prime Air to 1,100 acres dedicated to the CVG hub facility.

When completed, the hub is expected to include more than three million feet square feet of structures and dozens of aircraft.

I am too conservative to stay silent on racial injustices

Request made to remove statute of Robert E. Lee in Murray

We must not be silent on racism

I am too conservative to stay silent on racial injustices

In over 25 years of ministry, I have been called a lot of things, but liberal, socialist, and Marxist have not been among them. Well, there has only been one exception to that assertion. When I have spoken out about racial injustice, I have been called all three and more.

We must not be silent on racism

Finding light through the darkness